We mourn the loss of one of our sisters, Rev. Anderson Lynn Mar (Dark Sky) who was lost in a tragic accidental fire in March.

Anderson was a well-known figure in the Boston music scene and the city’s underground and goth circles. She was 41. Mar suffered critical injuries from a March 24 fire at a Fall River apartment. After 4 days in the hospital, her family made the difficult decision to withdraw life support. She never regained consciousness. The fire was apparently an accident, and caused by candles that ignited a couch at a friend’s apartment.

Mar was an instructor at the Boston School of Rock and founder of Dark Sky Productions, a live music and nightlife booking agency that specialized in goth, punk, and underground music. She was also the singer of goth band Sans Nomenclature, whose next gig was to have been Friday, April 11 at the Cantab Lounge’s “Club Bohemia” in Cambridge. It would have been Mar’s 42nd birthday.

A graduate of the University of Maine, Anderson Lynne Mar had been involved in various aspects of the music industry since 1993, as a promoter, producer, performer, radio broadcaster, nightclub DJ, and festival organizer. 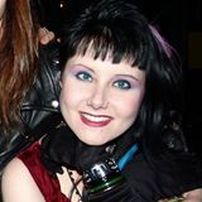